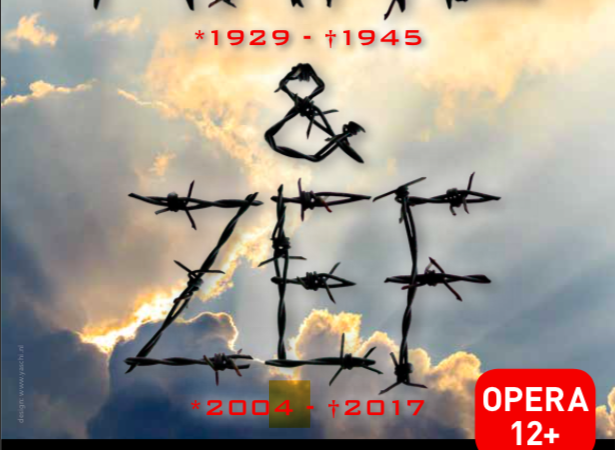 Anne Frank died in concentration camp Bergen-Belsen. Zef, an Albanian boy from our time, is the victim of a vendetta. They meet each other in “heaven” where they find out that they have a lot in common despite their cultural differences. Anne is a writer, Zef would like to be an actor and they both have issues with their parents. They tell each other about their lives which brings them closer and closer together.

This is, in short, the story of the fascinat ing youth opera ‘Anne & Zef’. Anne will be played by the Albanian soprano Anjeza Marku (2002), and bariton Patrik Vjollca (1997) will take on the role of Zef. The music will be performed by an orchestra formed of Albanian musicians and will be conducted by Huba Hölloköi.

Playwright Ad de Bont wrote the libretto for this opera, based on his successful play Anne & Zef, which was inspired by Anne Frank’s world famous diary. The music is by Dutch composer Monique Krüs. Director of the opera Corina van Eijk, who also adapted the libretto, states the following:
“Both children have been locked up until their deaths, but they meet each other in the context of absolute freedom; the afterlife. With this opera, we want to show that little has changed since the times of Anne Frank. People are still locked up in places of which we hardly learn or hear anything. These people do not appear in the news; their stories however rise to the surface only years after they have taken place. Thanks to Anne Frank, we now know a lot more about daily life during World War II. It is not a light topic, however, due to the compassionate music, which is composed particularly for young singers, the opera promises to be thrilling as well as a moving experience.”

The opera is suitable for adults and children from the age of 12. Anne & Zef was commissioned by Netherlands Philharmonic Orchestra. The original production by the orchestra, directed by Corina van Eijk, with set designs and video animation by Jolanda Lanslots and lighting designs by Henk Post, will be presented in a new English translation by Jonathan Levi in cooperation with Opera Spanga, Syri Blu, The Embassies of the Kingdom of the Netherlands in Tirana and Pristina and is supported by Bavaria Holland, VidiSquare, Neelevat and Fiege transport, the “Performing Arts Fund NL” and the Embassy of Israel in Tirana.

Anne Frank is in Heaven. Zef Bunga appears and thinks he recognizes her. They talk about their lives and death and what they did when they went into hiding. Anne wrote her diary and Zef was acting. Anne asks Zef if he wants to do some acting for her and soon she plays along herself; Zef plays his own father and Anne his mother. Zef talks about the Kanun, the blood revenge and his brother, Anne tells about her time in camp Westerbork and the concentration camp Auschwitz. They complain about their parents and share their dreams. A special connection develops between the
teenagers.

Anne & Zef was made possible by:

Special thanks to Vanesa Berisha, Culture Officer of Embassy of the Netherlands and
Prof.Isak Shehu, Dean of Music Faculty of the University of Arts Tirana.